Although he insists that it's not any kind of "cold fusion" process but rather a, as yet unknown, LENR event.
A reaction of the Weak Nuclear Force.
Bushnell believes that heat is generated from beta decay of subatomic particles
This is totally contrary to what Rossi maintains is occurring within the tiny device.
Rossi's comments, “If beta decay explained the reactions in my device, I would have been killed already [by the radiation] and we would have found different isotopes.”

Further research will uncover the mystery of this tiny contraption. 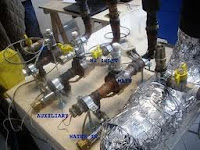