What is the E-Cat? 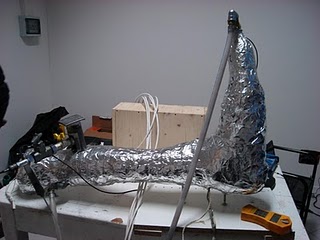 The Energy Catalyzer is a Low Energy Nuclear Reaction (LENR) or also sometimes called a "Cold Fusion" device developed by the Italian engineer and inventor Andrea Rossi based on the initial research of Professor Focardi of the University of Bologna.
It creates thermal energy or heat by a (still unknown) reaction between finely powdered nickel (Ni) and hydrogen gas (H).
A small quantity of “treated” nickel powdered is placed in the chamber of the device and hydrogen gas under pressure is also admitted to one inlet. The small device consists of a internal stainless steel chamber with an external housing of copper. It also has an external clamp type resistance heating element. The heater is used to provide sufficient ignition temperature of approximately 900 degrees F. The reaction occurs after this initial heat is applied but cut back for modulating the process. It is necessary for the external heat to continuously be applied to sustain the reaction.
A mysterious catalyst is also used during this process but it has not yet been revealed due to the patent applications. Rossi insists though that it is a commonly found compound that is inexpensive in cost.
Water is injected in the outer copper pipe and the thermal energy produced from the reaction converts the water directly into to steam. The steam can be utilized to provide usable heat or to drive a steam turbine electrical generator.
The catalizer is purposely made small in size to control the LENR reaction. If a larger device is used, the reaction would be self-sustaining and not require the external heat source to run the process. Unfortunately, the device could then enter a run-away state and create an explosion. Rossi engineered it smaller to require the external heat to control the device and in turn, prevent a run-away condition.
There is a penalty in this as it requires an external source of electrical power to provide the heat energy. This is negligible as the energy produced far out ways the energy required for the heater. The device takes about 400 watts/hour to run, but produces 15,000 watts/hour of energy. In other words, it takes the equivalent energy of about four 100-watt light bulbs to produce 150 100-watt bulbs' worth of power –- 37.5 times more output than input.
Multiple devices can be coupled together in parallel and in series to boost the production and the pressure of the steam. The cascading of the devices can be scaled up to drive large turbine-generators to produce mega watts of electrical power. A one-megawatt plant will be opening during the second half of October in Xanthi , Greece. This plant will utilize one hundred and twenty five 10 kW modules chained together to produce one megawatt of output.
The amount of nickel and hydrogen consumed in the process is negligible. Only .10 grams of nickel and hydrogen will produce kilo watts of energy. It’s calculated that one gram of nickel in the E-Cat can produce the equivalent energy of 517 kilograms, or about 1,140 pounds of oil. A gallon of oil weighs roughly 6-8 pounds depending on its density, so one gram of nickel in the table-top sized E-Cat can produce about the amount of energy generated by about 142 gallons of oil.
According to Rossi's International Patent application, "...a full transformation of 58 grams of nickel would generate the same amount of energy obtained by burning about 30,000 tons of oil."