Is NASA Trying to Capture Some of the Glory? 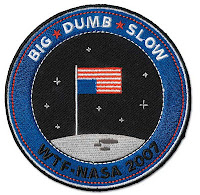 It seems that NASA is attempting to dodge the public backlash that is going to hit them right after the masses become aware of the Rossi-Focardi Effect.

In other words...
"We could have had this technology 20 years ago!! What the hell have you guys been doing all this time?!? Some little guy in Italy working in his back-room developed it first!!"

NASA has posted this video to the NASA Technology Gateway.

In it, senior scientist, Joseph Zawodny describes the "Great Big Beautiful Tomorrow" that may be possible from the Ni and H fusion (LENR) technology.
This is just about ready to spring forth with Rossi announcing the planned sales of his E-Cats.
Initially planning to manufacture and sell over one-million units the first year, at $50 per kW .*
Not to mention his already built and delivered 1 MW plants. 13 at last count.

It may be further evidence that something remarkable is about to happen. And NASA doesn't want to look like they're totally in the dark.

Can you blame them?

One of the greatest governmental agencies, a technological juggernaut, may just have been caught with their pants down with this one. Rossi’s invention may have totally blindsided them. And now, they are trying to do a little "spin recovery" by trying to capture some of the glory of the explosive implications that this technology will bring.

*  Rossi's quote from his JONP site
"The big science, after trying to ridiculize us, now has understood that the E-Cat works, so now they are trying to copy and make patents to overcome us, discourage us and trying with this sophysticated way to stop us under a disguise of an indirect vindication. Is a smart move, but they are underevaluating us. I will never stop, within one year we will start the delivery of million pieces at 50 $/kW, with a totally new concept, at that point the game will be over. This technology must be popular, must cost a very low price, must be a real revoluton, not a bunch of theoretical (wrong) chatters."
Posted by F. Guidi at 4:28 PM

Email ThisBlogThis!Share to TwitterShare to FacebookShare to Pinterest
Labels: Nasa